The SWD: ARH Approach to Balance

Inherent, though often left unsaid in continuing a game beyond the lifespan granted to it by its creator is the responsibility to maintain the rules and to make the playing field as even as it takes to make the game interesting. It is pure joy and a true privilege to turn ideas and concepts and what-if scenarios into actual cards people will play with. The actual work of the matter is making sure they are fun for players on both sides of the table to experience.

Or, to put it another way, if we were to put out cards on the regular but do nothing to compensate for the regrettable yet inevitable imbalance that is sure to result from this activity we would be doing everyone a disservice.

Like everything else the committee does, our approach to how we balance the game after releasing cards into the wild is going to be structured. And like everything else we’ve done so far, the structure of this aspect is sure to change over time as we figure out the best possible way to get things done. But for right now here is what to expect.

Lets take this one word at a time. Regular. Every month, there will be a post outlining how we see the state of the game in terms of balance. You will get to know where our heads are at, the things we are keeping an eye on, the things we are taking action on, etc. One of the positive aspects of not doing physical distribution and taking money in exchange for services is that we don’t really need to consider financial aspects or collectability aspects when doing balancing. If something is a problem, it’s a problem. And we all like to solve problems here. We have no need or desire to let a problem fester just because we have something coming out in the next set we think might fix it.

This post is part of balance being something which must be Planned. This implies two things. The first of which was already alluded to, which is that something somewhere is going to go awry. It’s not something we look forward to happening, and it is something which we spend many many hours trying to ensure happens as little as possible, but it will happen. However comma. We will also not resort to whiplashing the playerbase by being over-reactive. In all but the most dire of circumstances, balance communications will occur monthly, even if there were no actual changes made. As new deck ideas, optimizations, and meta-adjustments happen we want to make sure that we don’t stifle the hard work and creativity without very clear justifications.

Balance does not mean equality. As an extreme example, at the time of writing there is no way to reasonably balance a Sinjir deck to the point where he could compete on a serious level with Darth Bane. Moving back towards the realm of what people might actually expect, there is also no way to ensure that all competitive decks have equal win-rates. And even if we could, the result would be incredibly boring. There will always be a best deck, there will always be a worst character, and there will always be some card choices that are inherently better than others. What we seek to avoid, is a situation where one deck is always, or nearly always better than all, or most of the other options.

The last word may very well be the most important. This post, and the monthly balance posts may appear to be edicts from on high. But they are the last stage of the process, which will rely in no small part on you. We are not on top of some mountain somewhere, we are incredibly accessible and we encourage you to use that to help us craft the game you look forward to playing. Let us know what you see and what you experience. Though the admin and design teams probably won’t respond to each and every post or criticism, we do pay very close attention to the discussions which take place. To uphold our end of the bargain, all balance changes we do make will have our justifications and rationale attached. Even if no-one is buying 40 dollar legendaries off the secondary market, it isn’t exactly fair to nerf a players favorite deck into the ground without a reason. That player may not agree with the reason but they at least deserve to have a starting point in their rant as to why we’re wrong.

Balance updates will be published every month, even if there are no actual changes made.

Balance updates will come with explanations of each decision, and include what we are monitoring closely but not taking action on just yet.

We are open to any and all feedback.

When we launch Faltering Allegiances, we will also be launching our first set of Holocron Documents. Along with new rules and card clarifications, there will also be some initial balance changes taking effect on 16OCT2020. Most of the changes are minor, but as you all gear up and start brewing deck ideas there is one change we want to announce ahead of time.

Fateful Companions (SOH#111) will be banned.

Detailed reasoning will follow, but because this is a major move we wanted you all to have advance notice.

And just to be perfectly clear ahead of time, SWD: ARH Standard will have the following sets legal for play:

With this approach, we hope to be a dependable and responsible steward of the games balance. It will be a fine line to walk between giving players what they want in terms of balance without devolving into a state where only the loudest voices are catered to. But it is a responsibility we took by default, and one we take with utmost seriousness.

We do want to ask one thing however, and that is a modicum of patience. As Destiny grew, so did its formats. Our primary concern at the moment is ensuring ARH Standard has a solid meta environment. If your favorite format is Infinite or Trilogy we will cater to that eventually but with far less data to pull from on those metas and far less at stake in terms of game health, our attention to those formats will be much less intense at first. 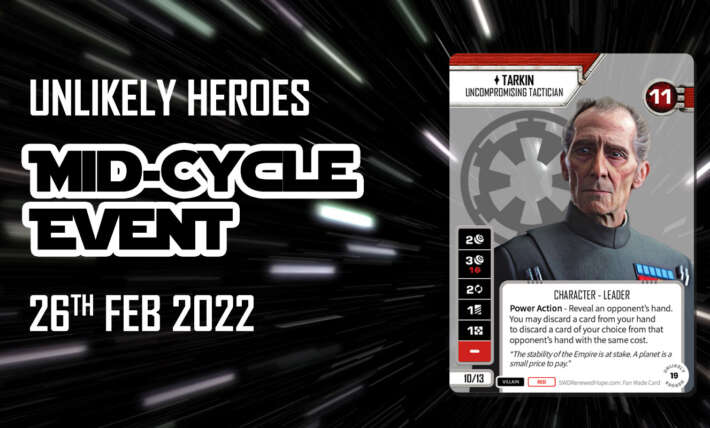